The remains of the first Civilian Governor of Lagos State, Alh. Lateef Jakande was on Friday,  interred at Vaults and Gardens Cemetery, Ikoyi  under strict observance of COVID-19 protocols. 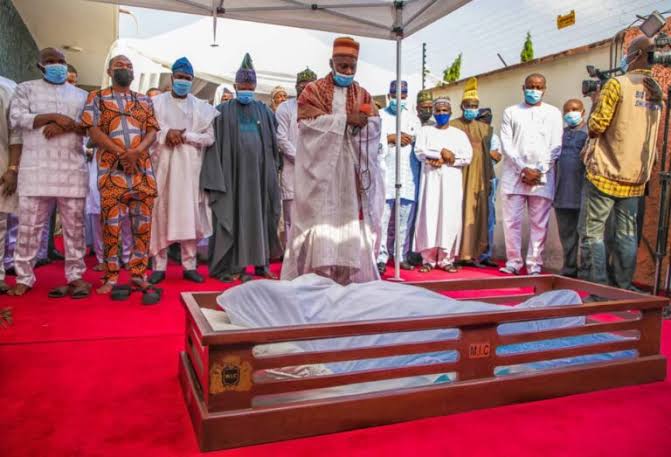 The News Agency of Nigeria (NAN) reports that the burial was preceded by  Islamic prayers at his residence, number 2 Bishop St., Ilupeju, Lagos state in the morning.

Several dignitaries from across the country and clerics were at the funeral of the late ex-governor to pay him their last respect at the cemetery.

Among the dignitaries at the cemetery were Gov. Babajide Sanwo-Olu of Lagos state and his deputy, Dr Obafemi Hamzat, former Ogun governor; Chief Olusegun Osoba; Chief Imam of Lagos, other Imams among other personalities.

Several personalities waited anxiously at the cemetery for the arrival of the body before the corpse was eventually brought at exactly 5:21pm.

Imams and dignitaries were well positioned under  heavy security provided by  operatives of the Nigeria Police, and Soldiers to ensure a hitch-free ceremony as Islamic rites was conducted before the internment at exactly 5:45pm.

Islamic clerics from  various Lagos divisions took turns to offer long prayers for the repose of the soul of Jakande in Aljanal Firdau.

One of the clerics, Imam Lookman Junaid of Sangrose Mosque, Lagos Island described late Jakande as the best governor Lagos state ever had.

“May his soul rest in perfect peace. We have not seen any governor that has achieved what Jakande achieved. May God grant him Aljanal Firdau. Many people became educated just because of him.

“Many of us are educated just because of him. What about the roads, interconnectivity of Lagos, housing and other legacy  projects.

“He did a lot within a four year term. If he had been given the second term, he would have achieved more.

“No governor has ever achieved what Jakande achieved. He was a merciful governor. He was not self-centered.

“He was open minded and spent public funds for the public. He didn’t embezzle public funds. He lived well and he died well,” Juniad told NAN.

Mr Kayode Opeifa, Vice Chairman of the Presidential Task Force on Restoration of Law and Order in Apapa, and former Lagos Commissioner for Transportation said that late Jakande remained unparalleled.

Opeifa said: ” There is none so far equal with him in governance of Lagos state.”

Also, retired Commodore Ebitu Ukiwe, the immediate past military administrator of Lagos State, who handed over to late Jakande in 1979, said that Jakande was a quiet man of peace and honour who governed the state well.

NAN reports that Pa Jakande, the first Civilian Governor of Lagos State and former Minister of Works and Housing, died on Thursday, aged 91.

Jakande, a former journalist, was Lagos State Governor from 1979 to 1983, and later served as Minister of Works under the military government of Gen. Sani Abacha.

His administration as Lagos State governor left a legacy of massive infrastructure development during his four-year stint, especially through numerous Jakande estates built across the state as well as his monumental investment in education. (NAN).