Boris Johnson last night bullishly signalled that he is ready to quit Brexit talks within 48 hours unless the EU drops 'ludicrous' demands that would curb UK independence. 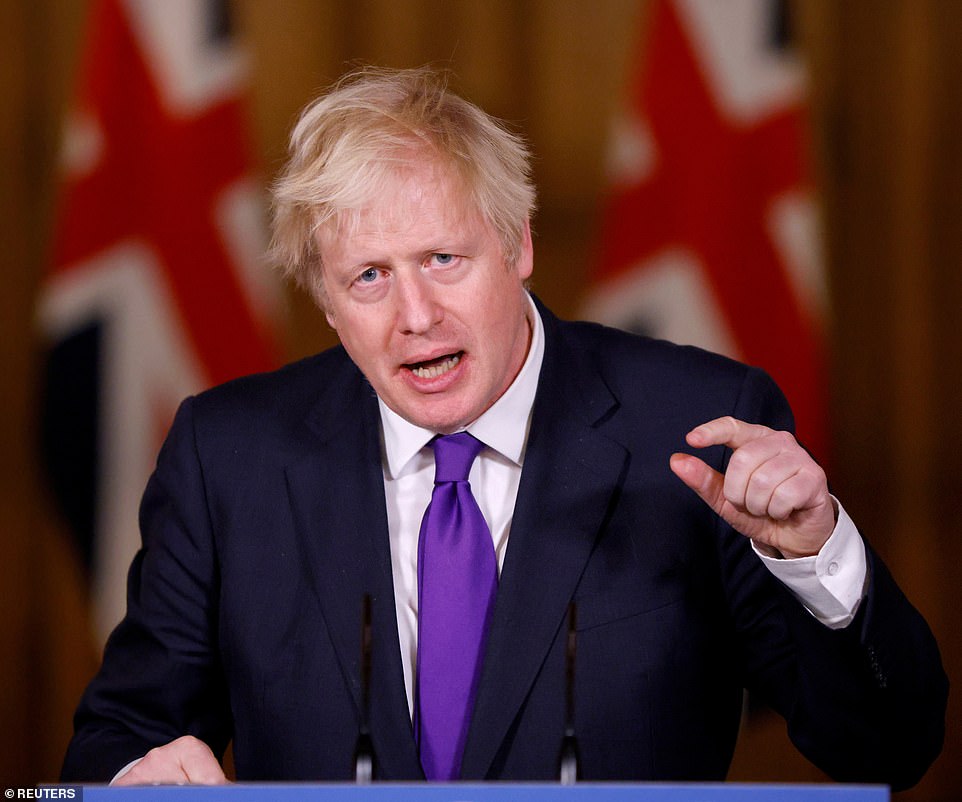 The PM, who infamously vowed to get Brexit done 'do or die', has now told his chief envoy Lord Frost that he will not sign any deal that binds Britain to future Brussels laws.

Cabinet ministers had yesterday rallied behind Mr Johnson, insisting that he was not afraid to crash out of the EU Single Market and Customs Union without an arrangement in place by January 1.

But a leaked 34-page dossier, marked 'official secret' and written in September, revealed that No10 is drawing up a list of 'worst-case' crises that could overwhelm the nation in the even of a No Deal Brexit.

These include a medicine supply shortage and a fuel shortage, rising food prices, public disorder and increased risk of terrorism, clashes with EU trawlers and border disputes and tariffs.

The memo indicates that some Cabinet ministers remain nervous about the impact of No Deal on Britain as it grapples with economic devastation inflicted during the pandemic, with one source telling the Mail: 'The possibility of chaos at the border has been significantly underpriced if talks collapse.'

British officials were stunned by a hardening of the EU's negotiating stance last week, and hit out at French President Emmanuel Macron for threatening to veto any deal that damages French interests.

He also wants any post-Brexit agreement to include the power to levy tariffs if the UK fails to stick close to EU rules on issues such as employment rights and the environment.

Ireland, which has most to lose from a No Deal Brexit, yesterday appealed to both sides to keep talking, and a close ally of President Macron acknowledged that Germany's Angela Merkel was pushing for an agreement.

Dutch sources were also last night indicating they might compromise on fishing rights after initially sticking with the French.

Last night it was reported that a breakthrough had been made, with the two sides close to an agreement over the level of access for EU boats in UK waters. The changes would be phased in over a five to seven years, according to The Guardian.

Lord Frost travelled to Brussels yesterday to resume negotiations with Mr Barnier in what government sources described as a 'final throw of the dice'. But neither side was predicting an immediate breakthrough.

One source said Mr Johnson was ready to walk away as early as tonight unless the EU backed down, adding: 'It's fair to say the Prime Minister isn't bluffing. It's pretty clear we will leave on No Deal terms if the EU can't accept that we will be an independent nation. There won't be any agreement if the EU do not recognise this reality. We'll only keep talking if there is some movement and if we think there's any point.'

An ally of the Prime Minister said he was 'bullish' about the UK's prospects outside the EU, with or without a trade deal.

A senior Downing Street figure yesterday said the chances of a deal were 'at best 50:50'. Another insider put the figure at just 30 per cent.

Mr Johnson will tonight ask Tory MPs to reinsert controversial clauses in the Internal Market Bill, which were thrown out by the Lords after ministers admitted they would break international law.

Mr Barnier has warned such a move would put the talks in crisis. Downing Street claims the measures are needed to stop the EU driving a wedge between Northern Ireland and the rest of the UK under No Deal.

Mr Barnier is due to brief EU ambassadors this morning on possible areas for compromise.

Mr Johnson has pencilled in another phone call with European Commission chief Ursula von der Leyen this evening to discuss whether talks are worth continuing.

A No 10 source confirmed the drawn-out negotiations were 'entering the last 48 hours'.

Cabinet ministers yesterday backed the PM to pursue No Deal if talks collapsed, saying he had a mandate to ensure Britain took back control of its laws. But many remain nervous about the impact of No Deal on a fragile economy.

There are three key sticking points in the negotiations between the UK and the EU on a Brexit trade deal:

1. The 'level playing field': the EU has demanded that Britain matches its rules on issues including state aid subsidies, workers' rights and environmental protections to prevent this country from undercutting firms on the Continent.

2. Fishing: Brussels wants EU trawlers to keep their existing rights to fish in British waters. Although this is a small economic sector in Britain, it has huge symbolic importance.

3. How to resolve any future disputes: Britain is refusing to accept a role for the European Court of Justice.

A leaked official document setting out the Government's 'reasonable worst case scenario' for No Deal warned it could see severe disruption of vital supplies, including medicine.

Environment Secretary George Eustice acknowledged that tariffs under No Deal would lead to higher food prices, but insisted the rise would be modest.

In a series of interviews yesterday, he accused the EU of introducing 'a whole load of additional demands' late in the day, adding: 'There is no point denying that what happened late last week was a setback.'

He described the EU's demands on fishing as 'ludicrous', saying they would make a mockery of Britain's newfound status as an independent coastal state.

He said the PM was willing to give assurances that the UK would not slash standards in environmental protection and employment rights.

But he said Mr Johnson would never sign off a deal that met Mr Macron's demand for Britain to continue following EU rules in future.

Eurosceptic MPs yesterday piled pressure on the PM not to back down. Former Brexit minister David Jones, who is a member of the European Research Group of MPs, tweeted: 'Total confidence in David Frost and the UK negotiating team to stay steadfast in pursuing a fair free trade agreement that respects UK sovereignty. We must settle for nothing less.'

Fellow Tory Andrew Bridgen has said the PM would be 'finished' if he signed a deal that failed to guarantee independence.

Former Treasury mandarin Nick Macpherson said the bust-up with France had the hallmarks of the kind of confected row that often precedes a settlement.

'The UK needs a deal. The EU wants a deal,' Lord Macpherson added. 'To convince their constituencies, there has to be a lot of drama in the coming days.

'But there will be one. There always is – unless one of the parties makes a gross miscalculation.'

EU leaders are due to hold a summit on Thursday, which is seen as the last chance to sign off a deal.